Pipelines versus platforms: Power and the politics of knowledge

Posted by Peter Donovan 4 months, 1 week ago in policy and framing /

Is the age of miracle cures--of quick fixes, of institutional, top-down solutions for complex problems--on its way out? What patterns or possibilities are these widening ripples generating?

For agriculture in the U.S., the miracle cures of the 20th century include mechanization, pesticides, nitrogen fertilizer, large irrigation projects, biotechnology, and the development of a distribution system for these technologies. These revolutionized agricultural production around the world, with a singular focus on yields and efficiency. Agricultural research and extension, along with the land-grant university system in the U.S. that trains agronomists almost everywhere, effectively created a monopoly on the creation and distribution of knowledge. Huge corporations such as Monsanto-Bayer, Syngenta, and Cargill came to control inputs such as seeds and chemicals, agricultural methods, and marketing. Many agricultural lenders followed suit. These corporations also funded a good deal of agricultural research.

There have been great successes with many of these miracle cures and short-term fixes, and even today they are continuing. They have forestalled famines, reduced pest pressure in some cases, and saved farms from failure. They have enabled some countries to feed the world by exporting cheap food, extending their technology pipelines, and concentrating profit and power for the input sectors such as machinery, equipment, fertilizer, seed, and chemicals. They have helped maintain amazingly high levels of production on degraded and degrading soils, with increasing drought and pest pressure.

The oft-used analogy here is that of a pipeline, where research and development creates innovations and technologies which are then delivered to "end users" or farmers via channels and programs that provide information and incentives for adoption. It is a one-way flow, from the creators and developers of knowledge and technology to the presumed end users, driven by carrots and sticks (external motivations). The metric for success is the rate of flow: the adoption of practices or technologies, the signups to incentive programs, the sale of inputs.

With simple or mainly mechanical systems, the one-way pipeline design has often worked, at least for a time. In complex domains such as ecosystems, it lacks good feedback or accountability. Researchers, input suppliers, and extension take charge of knowing, while farmers are responsible for doing. Knowing and doing, knowledge and practice, are thus poorly correlated. The practices and strategies the one-way pipeline has delivered produce long-term, cascading failures: large-scale damage to soil health, desertification and compaction, massive loss of biodiversity, increased risk of erosion, drought, fire, and flood, much higher input costs, water quality issues and algal blooms, declining food quality, disappearing aquifers, more virulent weeds and pests, rising risks to human health, farm failure and consolidation, social conflict, and the hollowing out of many rural communities.

Institutional responses to these problems in the U.S. include adding different nozzles and channels to the pipeline: programs to promote conservation, sustainable agriculture, and climate-smart agriculture, to help underserved producers, to idle marginal and erodible land, crop insurance subsidies to de-risk agricultural production on increasingly degraded soils in a changing climate, to address marketing and rural community issues, for farmer mental health issues, and for institutional research on all of this.

There is also competition. Heretics and innovators have long challenged the monopoly of the USDA-land grant university axis for example on the creation and dissemination of knowledge and advice. The default or self-evident way to promote change is to set up another one-way pipeline through which an organization or consultancy can deliver its knowledge, information, best practices, and advocacy to its constituents. (See Deborah Frieze's trenchant critique and alternatives here.) 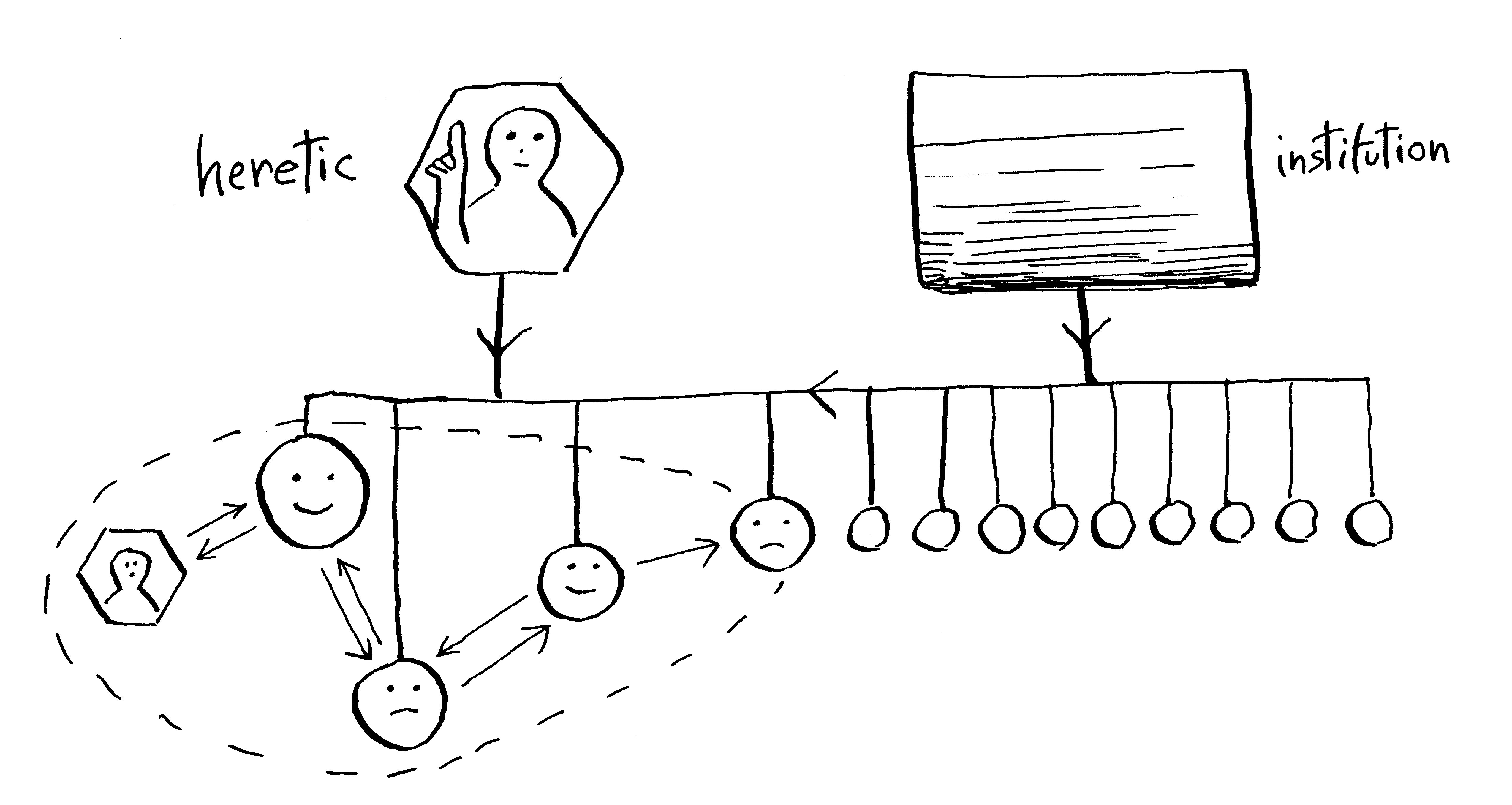 The Big Ag pipelines are still operating but there is increasing competition from sustainable, organic, or soil health movements and pipelines, which also compete with each other. Resistance and competition take many forms, including funding research to show that a rival movement's innovations don't work or can't be implemented, co-opting a movement's claims, various shades of greenwashing, and even partnership or combination.

Some heretics and innovators catalyze relationships between farmers, where similarly inclined or inspired farmers or ranchers begin to learn from each other, while still depending on pipelines for information, advice, or access to programs. This is the third pattern that is unfolding: the widening movement toward farmer-centered, peer-to-peer learning groups. This has been occurring for a long time, but in the last century the aforementioned institutional pipelines have displaced or sidelined a good deal of this activity.

Improving the productivity and soil health of a pasture or field is a complex challenge. As you might change the course of a fast-running stream by placing a log or rock in it, so the flow of sunlight energy through the pasture--photosynthesis, water cycling--means that small changes might produce large effects over time. Cause and effect may be entangled, like the chicken and the egg. There are lots of interacting variables, lots of unknowns, and some unknown unknowns. 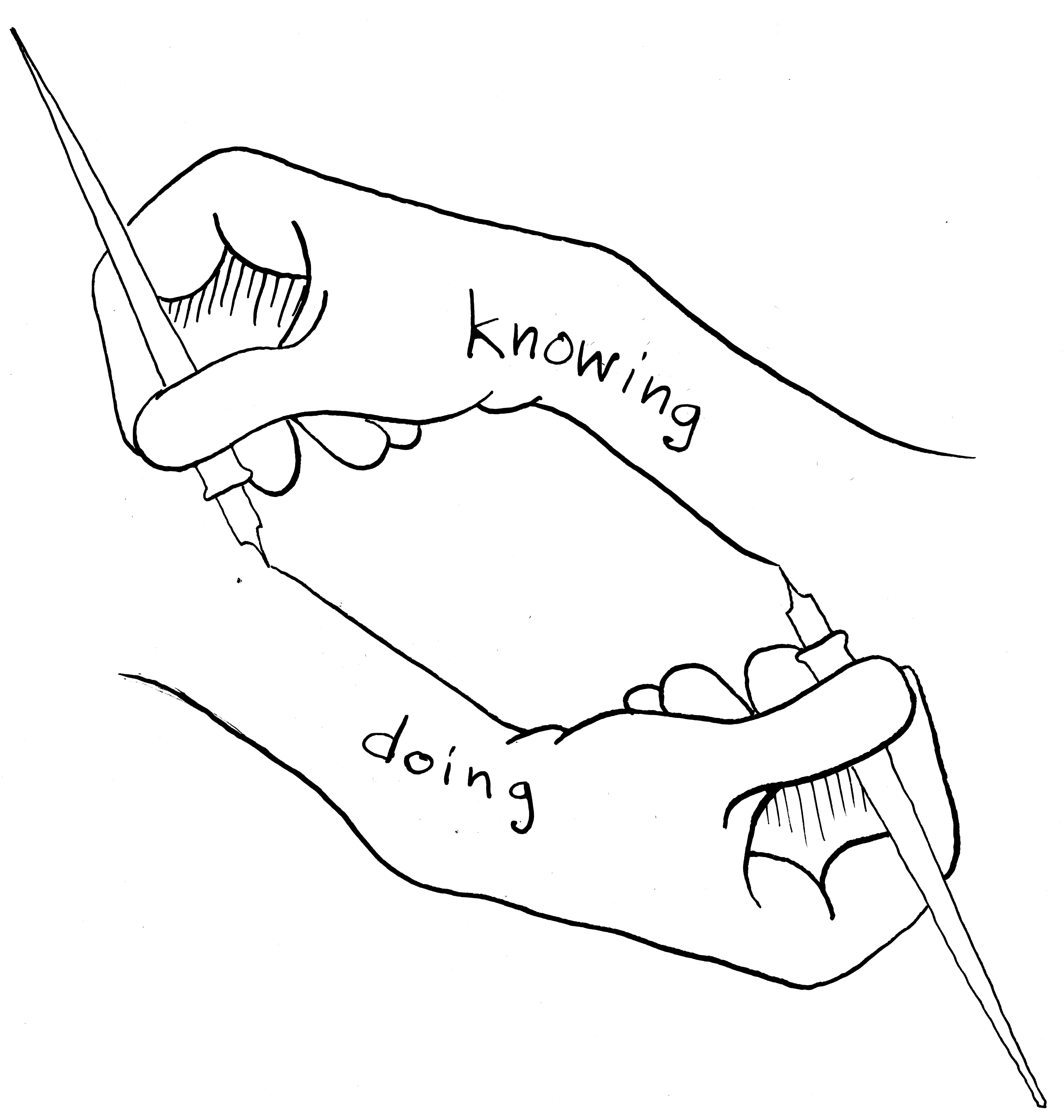 For knowing and doing, results and actions, to become correlated, the doers must also want to know--to accept the responsibility for their own education. This happens when farmers, ranchers, or land managers realize that there is a gap or discrepancy between their present situation, and what they recognize as needed, wanted, and possible. This gap can become a creative tension, an intrinsic motivation for learning that differs from the extrinsic motivations (carrots, sticks, and judgment) relied on by one-way pipelines.

While few seem to be abandoning the pipelines, the increasing popularity of farmer-to-farmer learning groups highlights the tension between top-down and bottom-up, between one-way pipelines and the must-have accountability of connected knowing/doing. Pipelines are still where the money and jobs are for educators, marketers, and consultants, and many farmers are either loyal, dependent, or both. Taking responsibility for your own learning in the face of complex challenges is scary and hard. Peer support is not everywhere to be found, and can be difficult to create and maintain. But a possible future pattern might be represented thus:

Aggregation has occurred, analogous to a process of soil aggregation. An institution (still somewhat rectangular) is now a participant in a learning network, with two-way exchange and internal accountability/feedback like the others--who may be individuals, or local groups of individuals. Internal accountability, the entanglement of knowing and doing at multiple scales, power sharing, the participatory co-creation of knowledge, as well as semi-permeable membranes that help protect against perverse incentives, are characteristic. It resembles an interdependent ecosystem, or a social mycelium, with two-way connecting strands, to use Didi Pershouse's term.

Such ecosystems are unlikely to be created by policy, but their evolution could be supported where there is some kind of start. Some organizations and institutions are trying to support peer-to-peer farmer networks, but there often remains a subtle collaboration between their own habits, skills, and capacities on the one hand, and on the other the trained expectations of many farmers to be told best practices, to respond to carrots and sticks, to be judged by experts. The power and acclaim that expert status confers continues to be addicting. The result is that people can postpone taking responsibility for their own learning. Knowing and doing remain separated, and monitoring or science is outsourced.

We're in the midst of an evolution, for which effective shortcuts are unlikely to appear. Three elements that can support the connection between knowing and doing in the face of complex challenges: 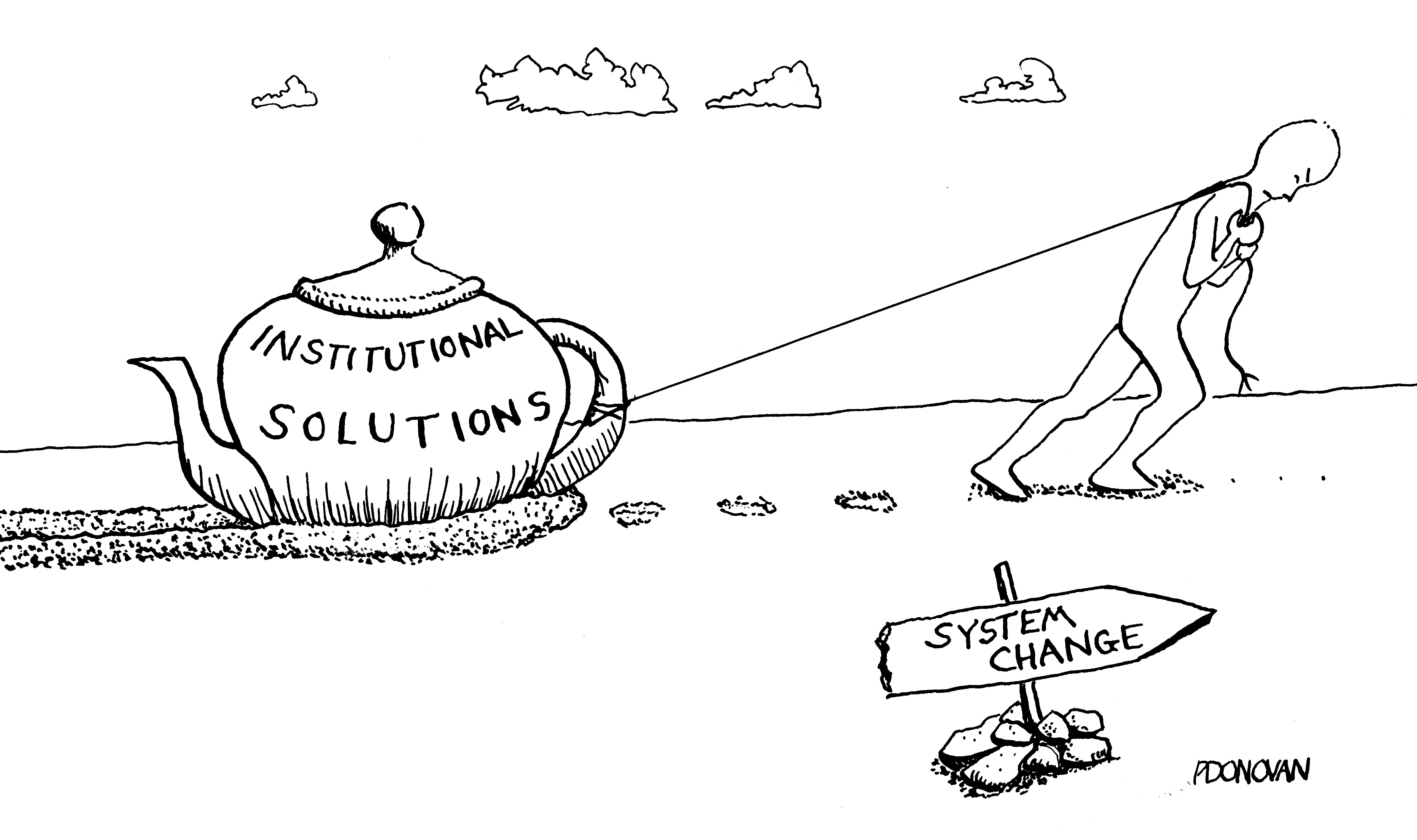 Institutional solutions . . . necessarily fail to solve the problems to which they are addressed because, by definition, they cannot consider the real causes. The only real, practical, hope-giving way to remedy the fragmentation that is the disease of the modern spirit is a small and humble way---a way that a government or agency or organization or institution will never think of, though a person may think of it: one must begin in one's own life the private solutions that can only in turn become public solutions. (Wendell Berry, The Unsettling of America, 1977)

It's not that institutions in themselves are bad. It's how many of them function today: extending and consolidating their pipelines, unaware and unskilled in alternatives.

The Global Alliance for the Future of Food, a consortium of NGOs, has put out an excellent document called The Politics of Knowledge. Vijay Kumar from Andhra Pradesh was among the contributors. It calls for "participatory, transdisciplinary research and action agendas," and offers many insights into the tension between bottom-up, farmer-centered learning efforts, and the top-down pipelines that have sometimes sought to suppress, negate, or replace them.

Agroecology requires an approach to knowledge that transcends compartmentalized, reductionist, market-led, and elitist knowledge systems in favour of bottom-up, people-led, holistic, and transdisciplinary approaches to knowledge and wisdom.

The co-creation, exchange, and mobilization of knowledge and evidence creates new entry points to systemic transformation and needs to be harnessed to facilitate action across food systems. Evidence on its own does not catalyze change due to structural barriers, such as short-term thinking, cheap food, export orientation, and narrow measures of success, that keep industrial food systems locked in place. Unlocking these structural barriers requires changing our research, education, and innovation systems.

There are pdf and multimedia versions in English, Spanish, French here: