The separation of nature and humanity, inconceivable to a hunter gatherer, resulted in a division of knowledge. Nature became an Other. Ecological or environmental literacy refers to the skills, experience, and concepts with which we understand Nature, and recognize and attempt to solve ecological problems. This ecological literacy has shown three broad stages of development. 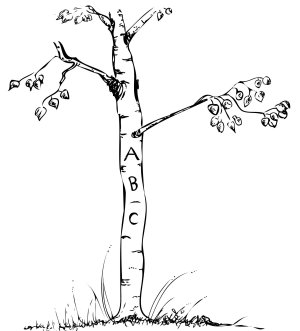 In the first generation, species of plants and animals form the alphabet of nature. To read or understand nature, you identify and classify species, and label them with a Latin binomial. Generations of field guides, checklists, and dichotomous keys reinforce this mode.

Judgment tends to follow labeling. In 1920 in the western United States, cattle were good and wolves were bad. By 1995 popular opinion was on the way to a reverse judgment. Billions are spent each year in eradication attempts against species that are labeled non-native, invasive, or exotic, with few successes. Likewise, reintroduction of previously extirpated species, such as the wolf and bighorn sheep, are beset by expense and controversy. Though single-species management is widely discredited, it is still routinely practiced on large scales, and our agriculture is based upon it.

The species concept underpins legislation such as the Endangered Species Act of 1973. The National Science Education Standards regard the species concept as the fundamental unit of classification in biology, though a solid or clearly demarcated definition of species has yet to emerge. (Charles Darwin, in the last chapter of the Origin of Species, welcomed the predicted demise of a fixed concept of species.)

The second generation introduced concepts of change, succession, and disturbance, beginning in the 1800s with Thoreau and George Perkins Marsh. The main theme, which gave rise to the conservation and environmental movement, is the negative impact of human activities on nature, which of course could be readily observed.

Species are still the alphabet of nature, but assemblages and relationships of species take on greater importance. The term ecosystem emerged in the 20th century. In most definitions, an ecosystem included abiotic components such as solar energy and water cycling as well as species and populations of living organisms. Ecosystems were usually labeled according to dominant plant species, as in a redwood forest, spruce bog, or sagebrush steppe.

Ecosystems are human constructs. They are not observed entities or phenomena with definable boundaries. A wide variety of principles and emergent properties have been attributed to ecosystems, and most—such as the balance of nature, stability in the face of disturbance, homeostasis, natural selection at the level of ecosystems—have long been discredited. However, strong public ethical and cultural commitments to these constructs persist. As Dan Botkin (Discordant Harmonies) and others have observed, our beliefs about nature, and our knowledge, are out of step with each other.

A belief in ecosystem integrity or stability is certainly not absurd or ridiculous. Many of these beliefs come from traditional cultural and religious values, such as compassion, or guilt about our consumption and about our human role in environmental change and degradation. We’re guilty—even if an objective, measurable criterion for ecosystem integrity hasn’t been found. Even if forests worldwide may not be endangered or threatened, they ought to be. Minnesota forestry professor Jim Bowyer found that these beliefs, common in college students and even in sawmill workers, were resistant to more objective assessments.

These beliefs gave rise to conservation biology, fire ecology, disturbance ecology, restoration ecology, and weed science, in which the goal of reversing, mitigating, or preventing human impacts on ecosystem integrity is routinely assumed. Environmental change is bad, and humans are to blame. The agenda becomes wreck the planet more slowly.

In the 1990s, the federal government adopted “ecosystem management” as policy for federal lands. Millions have been spent preparing papers on and defining ecosystem management, but without clear goals and measurable outcomes there is no accountability.

Beliefs about nature’s stability make it easy to recognize negative feedback loops, as in predator-prey interactions. But positive or reinforcing feedback is much more difficult to recognize, as in the synergy of humans with their landscapes, highlighted by Dan Dagget in his recent book Gardeners of Eden: Rediscovering Our Importance to Nature (reviewed here).

This second generation, with its beliefs in ecosystem integrity, has resulted in the designation of millions of acres of wilderness and other protected areas. However, these beliefs continue to mask the fact of widespread and often rapid degradation of protected lands (Yellowstone, Arches National Monument, Chaco Canyon National Monument), as well as the resilience and biodiversity of some well managed but unprotected lands under private stewardship.

And it is here, on private land, where the third generation has developed its focus on biospheric processes and cycles. This is a practical matter rather than a philosophical orientation or belief system. Processes and cycles can be related to specific goals in specific places such as enhanced wildlife habitat, better ground cover, or higher production. Progress can be measured in relation to a goal.

Nature is no longer just species, or even assemblages of species, but biospheric patterns, cycles, and wholes, fundamental processes that include all life: solar energy flow, water cycling, nutrient cycles, and community dynamics. Microbes are key players in these processes, which are the center of gravity of the earth’s biosphere. These processes can be observed and even measured in any area, at any scale.

Pristine nature, in some kind of imagined state unaltered by human activities, is no longer a central assumption or referent. Environmental change is happening, but it is not always bad. Human managers have opportunities to act creatively. Production of food and fiber can complement biodiversity—it is a matter of method, rather than a zero sum game. Complexity is addressed through a functioning feedback loop.

This form of ecological literacy was apparent by the 1930s in the work of Paul Sears, the ecologist who wrote Deserts on the March in 1935, Hugh Hammond Bennett who started the Soil Conservation Service, and Aldo Leopold. But with the industrialization of agriculture and the increasing separation of academic ecology from agriculture and land management, the awareness of ecological processes lost ground to technical fixes, cheap energy, specialization, and species-oriented solutions.

In the 1980s and ’90s, Zimbabwean wildlife biologist Allan Savory reintroduced ecological processes to change-seeking North American ranchers as the foundation of a holistic decision framework. The state of our resources reflects our management of them. For better or worse, we are managing the water cycle, the carbon cycle, the nitrogen cycle, energy flow, and community dynamics over vast areas of the globe. We can understand how these processes work, and do better. Savory also recognized the damaging effects of rest, or lack of disturbance, in arid grasslands. The ground-level successes of process-oriented ecological management are numerous, varied, and exciting.

This kind of ecological literacy and decision making poses a recognition problem to mainstream media as it does not fit into the usual story lines, nor does it feature the usual messengers. It has not come from institutions, major environmental groups, or the centers of power. It came from the edges of power and influence, where people were struggling with on-the-ground problems such as land degradation, social conflict, and the high cost of inputs. These independent farmers, graziers, and foresters recognized the advantages of working with biosphere processes rather than against them. The requirements for success—in attitude, in commitment, in unprejudiced understanding—are not easily met by agencies, institutions, or large corporations where the habits of specialization and hierarchical power arrangements prevail.