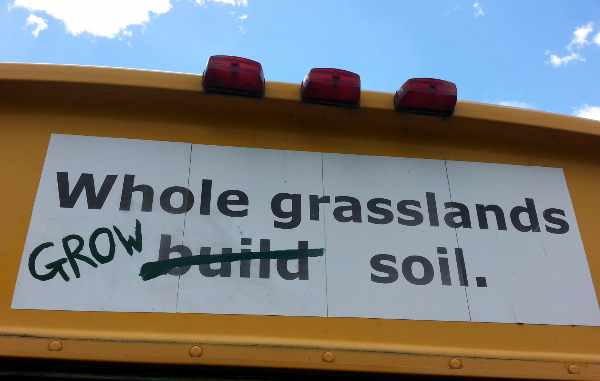 The sign on the back of the Soil Carbon Challenge bus. Thanks to Abe Collins for the long-overdue correction. Whole grasslands may also need people (and communities) who manage them with imagination, creativity, and commitment.

I've spent much of the winter in California, monitoring, going to a few conferences, and as spring arrived. watching bluebirds hunting from the lower branches of the oak tree while parked behind the Morris family barn in San Juan Bautista. I also flew to a couple of very cold conferences in Minnesota, the High Plains No-Till conference in Burlington, Colorado, and visited family and friends in upstate New York and Vermont.

We're continuing to do monitoring on fundamental processes, on the most powerful and creative planetary force--the circle of life, the carbon cycle, which has enormous leverage over the water cycle on land. In late January and February I remonitored some soil carbon baseline plots from January and February 2011. California has been having a historic drought, with creeks and wells going dry, and many ranchers destocking from lack of forage.

Most of the remonitored plots showed little significant change, or slight losses. An exception was the plot near Watsonville managed by Joe Morris of the TO Cattle Company. With sustained and attentive management -- holistic planned grazing -- Joe has been able to increase soil carbon in a drought.

In growing soil carbon even during a severe drought, using sunlight, limited rainfall, and careful holistic planned grazing with cattle, Joe is working with the process that makes the world go round in almost every sense save the actual physical spin: the biological carbon cycle driven by photosynthesis, by which plants and their partner microbes and animals grow soil that can accept and store water. In working in alignment with this most powerful and creative planetary force, Joe (and the Oregon and Saskatchewan ranchers resampled earlier) is showing the possibility and value of going beyond a problem-solving approach to a creative one. It is the creativity of this planetary carbon cycle that is often missed. We spend billions of dollars annually on predicting the various onsets of drought and climate change, and very little on showing the possibilities of creative approaches. We try to create change with external incentives, forgetting that creativity generally comes from internal motivations, imagination, and vision. 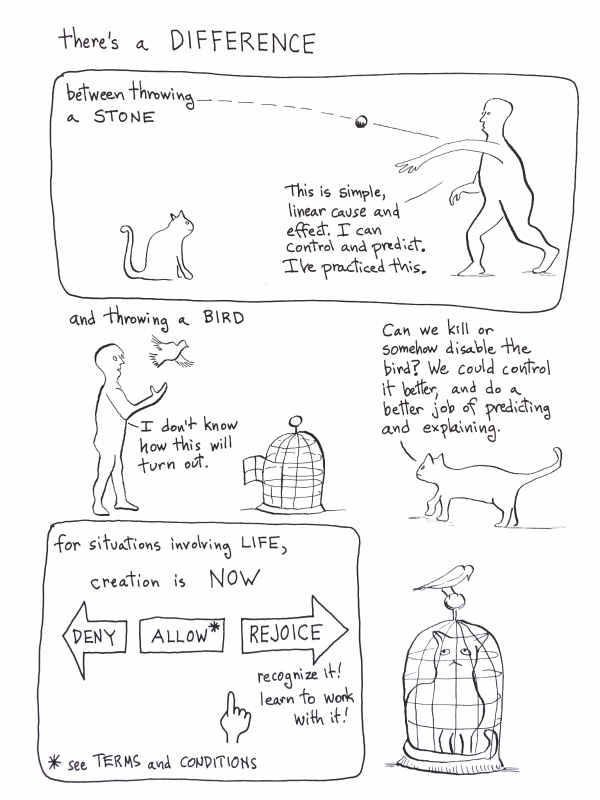 The reason we began the Soil Carbon Challenge was this. In the matter of soil health, and soil carbon, problem-solving approaches – managing against what we don’t want – hasn’t worked very well.

Measurements are scarce, but after trillions have been spent on agricultural and environmental conservation, most soils continue to decline, although in some cases the rate of degradation has slowed. As if to excuse this failure, soil is often viewed as a non-renewable resource, as something that can be wasted or lost but not grown at anything less than geologic time scales.

In other projects, Didi Pershouse in Vermont is putting together some learning resources suitable for schools and others around biological work, the carbon cycle, and the water cycle. Most of this will be available on our website starting here.

The California Rancher-to-Rancher project, funded primarily by the 11th Hour project, is helping interested California ranchers and land managers in setting up and monitoring bite-size experiments with higher-than-routine stock densities and recovery periods. Contact us if you're interested in participating.

We appreciate the interest and support of many people in our work. If you have suggestions for how we could make it easier for your organization, farm, ranch, or group to participate in monitoring and interpreting changes in the work of the biosphere, in carbon and water cycling, please contact us. Also, please contact us if you want to help with organizing monitoring in your community or region, if you can contribute data on soil carbon change from other efforts, if you are interested in contributing, collecting, and mapping data on the most powerful and creative planetary force.

I've just left my home territory in Oregon and am heading out to do workshops and demonstrate monitoring for soil carbon change and other indicators of biological work to community groups in Washington’s San Juan Islands, in Kamloops, British Columbia, and a string of them in northern Alberta. In July and August I will be in the midwestern U.S. Peter Donovan 541-263-1888 Soil Carbon Coalition soilcarboncoalition.org/about