Posted by Peter Donovan 4 years, 9 months ago in policy and framing /

In a series of talks in California in April, I was privileged to hear Walter Jehne, founder of Healthy Soils Australia, help us recognize the soil carbon sponge for what it is or can be. The soil carbon sponge is porous, well-aggregated soil rich in plant roots, diverse life forms, nutrient availability, air, and often holding lots of water.

Though this description is short and simple, it conceals a circular, barely visible complexity. The soil carbon sponge is both cause and effect of the kind of water and carbon cycling that supports basic human needs such as quality and quantity of human food and fiber, breathable air, drinkable water, biodiversity, and climate regulation. 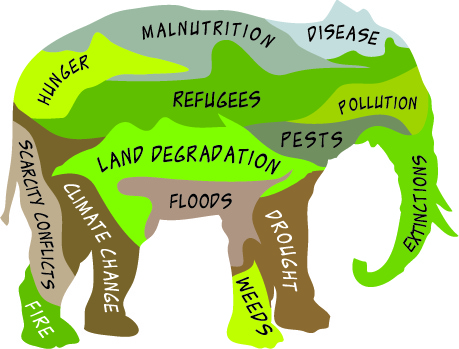 Weather extremes, soil degradation, and climate change have focused broad attention on soil, on carbon, and on water cycling. But the complexity and circularity is challenging. The most powerful planetary force--coupled carbon and water cycling, the circle of life, the soil carbon sponge--remains camouflaged behind a mixture of disconnected facts, problems, and assumptions. As Walter observed, the elephant is not even visible, or in the room. Here's why:

1. Reactive orientation. Our human default is to react against what we fear or don't want. We are quick with blame, labels, and judgment of good or bad. We simplify our world to linear cause and effect.

3. Specialized knowledge. Experts often have a vested interest and power in defending what they know, and supplying solutions, predictions, and answers. Experts become gatekeepers, guarding the problem definitions that match their expertise while lacking contexts and effectiveness for complex or wicked problems.

These habits and loyalties reinforce each other. We reward the railroading of a problem (or symptom) into best management practices, spend enormous time and treasure, and often worsen the situation. We manage against what we don't want. We manage and struggle over the parts--agricultural inputs, the Farm Bill--and hope that the wholes will come right.

Walter Jehne, who is a climate scientist as well as soil microbiologist, described several aspects of water cycling that are both cause and effect of the soil carbon sponge. As Allan Savory has long emphasized, the condition of the soil surface, and what's growing on it, controls the fate of rainfall. 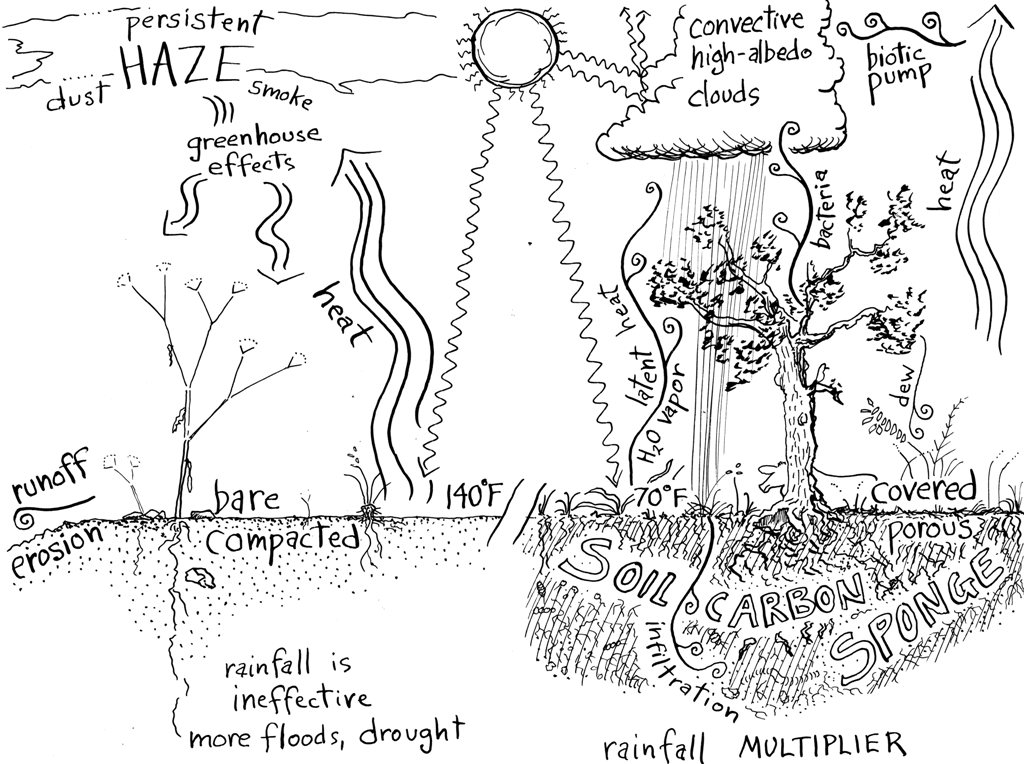 Deforestation, fire, and agriculture have tended to move landscapes leftward, baring soil, increasing fine dust particles that nucleate haze but not rain, planting short-season annuals, shortening the length of green season and the sugary plant root exudates that feed soil porosity and aggregation. Bare soil heats up, radiates, and some of this heat is re-radiated back from greenhouse gases. Regular fire or tillage bares soil and prevents the soil carbon sponge from developing. High-pressure domes over large expanses of hot bare ground repel rain. These landscapes multiply heat and aridity.

On the right, the formation of high-albedo rain clouds from abundant transpiration with bacterial precipitation nuclei helps recycle water locally, while the pressure drop from large-scale condensation drives the biotic pump, which brings in moist air from the oceans. When the clouds clear, heat can escape. Abundant plants harvest atmopheric moisture as dew. More solar energy is dissipated upwards by transpiration, and less by sensible heat. These landscapes multiply rainfall and cooling.

The soil carbon sponge may increase your local multiplier for rainfall--the number of times that water is recycled from soil to sky and back again before it leaves your area, either as vapor or runoff. If you are in a dry area, increasing your multiplier can be significant!

To shift a landscape to the right, keep in mind the soil health principles: integrate livestock, cover the soil, diversity, living roots as long as possible, minimize tillage. There is some evidence that a reduction in summer fallow (from 77 million to 20 million acres in the northern plains of the U.S.), and an increase in summer plant cover may decrease temperatures and allow for more convective precipitation (see Gerken et al. below).

The vast majority of the heat balance in our blue planet, Walter noted, is governed by water. Australian agricultural pioneer Peter Andrews wrote, "Plants manage water, and in managing water, they manage heat."

The opportunity to cool our planet, Walter emphasized, is by influencing the hydrological cooling processes, for which plants and the soil carbon sponge are critical. He suggested that a small increase in high-albedo convective cloudiness might even be enough, and if the soil carbon sponge could be increased rapidly, cooling could be correspondingly rapid.

By contrast, for many decades the focus of climate action and policy has been on limiting or reducing atmospheric carbon (carbon dioxide, methane) by reducing emissions, or some kind of "drawdown" such as increasing soil carbon. These strategies, widely implemented, would be undoubtedly beneficial. There is abundant supporting evidence that atmospheric carbon dioxide and methane have and will continue to warm our planet.

However, we have passed the point at which these proposed strategies are likely to yield safety in any kind of near term. The oceans have absorbed so much carbon that, in a drawdown scenario, they will equilibrate with or outgas to the atmosphere in accordance with Henry's Law (see further reading section below). Writes Walter Jehne:

After over 50 years of warnings and 30 years of global policy denial and delay, it is now too late for reductions in future CO2 emissions to adequately slow down its rise or its greenhouse effects. It is now too late even for the drawdown of carbon to zero or negative net emissions, by itself, to prevent accelerating the dangerous hydrological feedbacks and climate extremes.

How do we understand carbon, and its relation to climate change? Here are two different views. They do not contradict each other, and it's not about right or wrong here, but these two embody different possiblities or outcomes:

The fixation of much climate policy and activism has been on carbon as a greenhouse gas, that we can and should manage against. In part this is a "streetlight effect," where it's easier to look for a dropped object where there is light to see by, rather than in the dark where we dropped it.

Atmospheric carbon dioxide is measurable and its effects could be modeled, and by 1980 it was fairly clear to some scientists that humans were responsible. Water cycling and hydrologic factors were known to be responsible for most of earth's heat dynamics, but they were not so easily observed or modeled, and perhaps too vast for humans to have influenced. In the models, atmospheric water became a secondary feedback to carbon dioxide, and flooding, drought, and dehydration of landmasses became effects of CO2 rise rather than the circular cause/effect complexes of the circle of life.

The results of this fixation--understandable, evidence-based, and well-intentioned as it is--have been serious:

The real opportunity is B, the circle of life, manage for solar energy flow into plants and the soil carbon sponge, more photosynthesis and slower respiration/oxidation. There's tremendous complexity in this, and feedback is required to learn it, both as individuals and society. We need more streetlights! (e.g. atlasbiowork) We believe that carbon provides us with an opportunity to restore living biosystems. It is an essential piece of a larger functional whole. Our focus can shift from carbon as a problem to carbon as an opportunity by asking better questions about how that carbon is functioning. For example, instead of asking how we might affect atmospheric CO2, we might ask, how can I connect these 3 things: my intention, my agency or influence, and the most powerful planetary force (circle of life).

Walter noted that nature has been doing all of this since plants and fungi colonized the bare rock of land masses hundreds of millions of years ago. "We can lift our boot off nature's throat."

Q. Do you mean to suggest that high and increasing atmospheric carbon dioxide is not a problem, not a risk?

A. Atmospheric CO2 is not a direct risk--we can survive and even thrive in much higher concentration than 405 ppm--but it constitutes a huge risk because of the effects of its climate forcing: dangerously high temperatures, rising sea levels, superstorms, increasing flood and drought, and all the human consequences of those. However, as described above, because of the immense amount of carbon absorbed by the ocean, and our seemingly limited ability to reduce global emissions or get sufficiently large-scale "drawdowns" underway, we probably won't be able to fix the CO2 issue in any kind of near term.

Q. Do you mean to suggest that soil carbon sequestration is beside the point?

A. Again it depends on how we frame things, what questions we ask. With the usual kinds of greenhouse gas accounting, increasing soil carbon is probably beside the point. As growing the soil carbon sponge, it's extremely important for all kinds of reasons.

Photosynthesis, which drives carbon cycling, only captures about a quarter watt of sunlight energy per square meter of the earth's surface, on average. Water cycling captures about 80 watts per square meter (global average over all seasons, night and day, all latitudes), and thus does about 320 times the work. We need to ally ourselves with the big one, and of course photosynthesis gives us the means to do this.

It is in these water dynamics where the dangerous effects of climate change are, and this is where the remedy may lie, as Walter Jehne has been emphasizing for the last dozen years or so. The transformational chemistry of living organisms creates the carbon-glued soil aggregate, the soil carbon sponge, that is our fundamental hydrological infrastructure, and on which our other infrastructures of asphalt, steel, concrete, technology, economy, and civilization depend. (see also soilcarboncoalition.org/files/guide.pdf)

Habits influence perception: 2-minute rotating mask "illusion" https://www.youtube.com/watch?v=sKa0eaKsdA0 It can be difficult to "see" the concave side of the mask as we're so accustomed to a convex human face. It can likewise be difficult to maintain a focus on managing FOR what we need if our habits, vested interests, accumulated knowledge and experience, and surrounding cues make it easier to align ourselves AGAINST what we don't want. See also https://managingwholes.com/holistic-management-1.htm/

Henry's Law states that the partial pressure of a gas above a liquid equilibrates with the dissolved concentration of the gas in the liquid. This explains ocean acidification, but a less recognized phenomenon is its reversal, if significant drawdown of atmospheric carbon dioxide were to occur.

https://www.pmel.noaa.gov/co2/story/Ocean+Carbon+Uptake: "It takes about one year to equilibrate CO2 in the surface ocean with atmospheric CO2, so it is not unusual to observe large air-sea differences in CO2 concentrations."

"The amount of CO2 that must be extracted from the system exceeds the difference between the atmospheric amount without extraction and the target amount (e.g., constant CO2 emissions and no extraction yield 547 ppm for atmospheric CO2 in 2100), but to achieve a target of 350 ppm the required extraction is 328 ppm, not 547– 350 = 197 ppm. The well-known reason (Cao and Caldeira, 2010) is that ocean outgassing increases and vegetation productivity and ocean CO2 uptake decrease with decreasing atmospheric CO2, as explored in a wide range of Earth system models (Jones et al., 2016)."

My conclusion: the simple notion of carbon "sequestration" in soils, rocks, or the deep ocean to draw down atmospheric carbon dioxide, would be a bigger and longer job than most of its proponents anticipate. The reason we want and need more soil carbon is to improve the soil sponge, and this involves complexity.